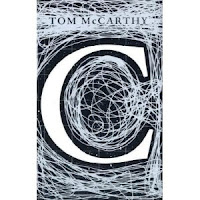 , I struggled with this one. If I had not been reading it for the Man Booker book group Iwould have abandoned it. I did not understand it. I was unable to fathom a plot and not see the point? What have I missed? A strange young man, Serge Carrefax is born into an even stranger family at the turn of the last century. ( Is he autistic?) His sister perhaps commits suicide. He grows up odd, there is a very strange sojourne in a German spa town as a teenager, he then goes to war in WW1 as an observer in the Air squadron. He is shot down, due to his own idiocy and drug addiction. He becomes a prisoner of war in Germany. He survives, gets sent to Egypt as a spy and dies. In between it is all very odd. Is it meant to be a comedy, the seance was hilarious, is it meant to be satirical? I have no idea! Confounded, Confused and Convoluted!