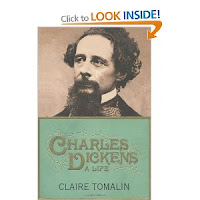 Gosh, I waded through this tome and it is a really large book, think of a doorstep and you have just about got it right! Well, it was worth it. I did learn more about Dickens than perhaps I needed to know, the minutia of his life, but as it so informed his work particularly in the early years I think in balance it was justifiable.
What I found so interesting was that I had to keep reminding myself that he was a man of his time. Many of his observations seem so current today. On the other hand in his later years he was vile to his wife and children ( well most of them) and this is extraordinary when you consider the depth, feeling and social conscience that he portrayed in his writing.
If you really want to look behind the veneer of his writing and contect his life to his body of work then this is the book for you. I was absolutely fascinated!
It is a huge book, and thus I think, it would have to be a very dedicated reading group that read it, but it would be interesting should there be any groups who are choosing to read a selection of his writing in this two hundredth year of his birth.
Posted by Vicki Goldie, author at 07:24 No comments: 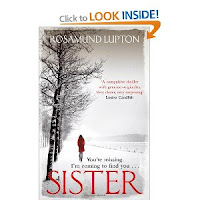 This is a great book. It had me on the edge of my seat for the whole day that it took me to read it. I just could not put it down.
It would make an excellent reading group book, given the subject matter.
There are two sisters one lives in the US and is materially successful, the other goes to art school in London. Given the distance they are very close. Then the unthinkable happens Beatrice's younger sister Tess goes missing in London. The police give up, her fiance is desperate for her to return to the states, their mother gives up, but Beatrice does not give up, This is a story about how far would you go to find out what had happened to your sister. As Beatrice slowly unpicks her sister's life, she comes to know her better and this affacts all the relationashps in her life. It is very difficult to say more without spoilers.
I recently attended a book club where we discussed this book and a really lively discussion took place, so I really recommend it!

Posted by Vicki Goldie, author at 16:10 No comments: