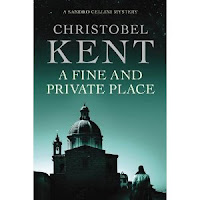 I thoroughly enjoyed the first book in the series and awaited this with eager anticipation. Perhaps it did not compare to the Booker list but I found it quite hard to get into. It did not seem to have such a strong sense of place as A Time of Mourning. However,it was a sort of 'country house style whodunnit' and as such the location worked. I like the character of Cellini, our detective and the unfolding of his home life. Where Christobel scores is in her characterisation, one really connects with her characters. This was quite difficult here as the secondary characters were rather thinly drawn but as most of them were murder suspects I could see why! I liked the plotting and the unfolding of the mystery, and as usual I did not guess the murderer. I look forward to the next in the series.
Posted by Vicki Goldie, author at 16:00