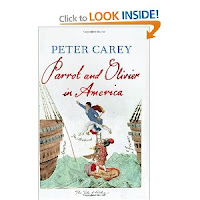 I didn't think I was going to enjoy this one, as it sounded odd from the jacket . It is odd but I really enjoyed it. The characters are completely off the wall and at the beginning I was completely at a loss. The alternating chapters by Olivier and Parrot worked very well as a device and I frequently found myself laughing out loud.
This book is set after the French Revolution. Olivier is a sickly French Aristocrat and his servant is Parrot an English oddball. To escape a potential further round of Aristocratic culling in France Olivier's mother gets him commissioned to write a report on American prisons. It becomes clear that nothing has equipped Olivier for democracy or America and it is left for Parrot to pick up the pieces.
A very funny book and very perceptive. It is Olivier that predicts in his aristocratic way the future of America as he leaves to return in despair to the disappearing Ancien Regime. Whereas Parrot is the success in settling and making a life in America. This is a book that relates to us on many different levels and again will make an excellent book group read.
Posted by Vicki Goldie, author at 16:39