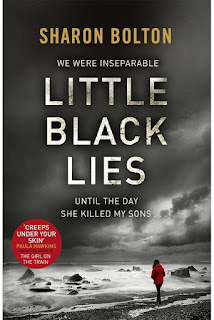 We are very excited that we have Sharon Bolton coming to Bournemouth for an author event at Westbourne Library on 22nd October.

Well what a fantastic book this is. Taut, dark, edge of the seat thriller. Set in the Falklands in 1994, it is an intense psychological journey. The book is told from several perspectives each revealing more of the drama unfolding in our narrator Caitlin's head.
Three years ago Caitlin lost both her sons in an accident, she lost the baby she was carrying and ultimately her husband as well. As she struggles to survive the only thing that seems to keep her going is her desire for revenge on the woman whom she blames for all her loss.
However, also during that time two young boys have gone missing and now a third is missing as well.  What has happened to them? Drawn into the search almost against her will, spurred on by Callum, a psychologically damaged former paratrooper who stayed on after the war, the book rushes to a brilliant climax.
This would make a fantastic reading group book, there is just so much to talk about, The Falklands, the whales, loss, revenge, friendship and the last paragraph, oh my word!
Posted by Vicki Goldie, author at 15:45 No comments: