Stieg Larsson - The Girl with the Dragon Tattoo 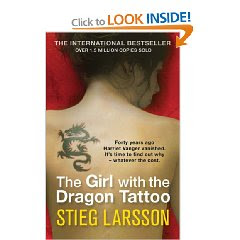 Despite being 533 pages I read this over the weekend. I really resented when I had to put it down. What a talent we have lost with the death of Stieg. This book has everything. an education on financial fraud, an old murder mystery, corruption, blackmail, stunning location - Sweden. We have Blomkvist, a disgraced financial journalist employed by the head of the bizarre Vangar clan , (Nazi skeletons in the closet - among others) to research the fate of his missing niece. Along the way he is joined by a research assistant, Lisbeth Salander, the girl with the dragon tattoo who has a disturbing, disturbed and mysterious past. She is 24, rides a motorbike, and is an expert hacker. Between them they begin to unravel the mystery and their lives become increasingly in danger. It is clear that a sadistic and insane serial killer has been on the loose for 45 years. Then there is just the small matter of revenge on the corrupt industrialist who had successfully sued Blomkvist for libel, ruining his reputation, resulting in a prison sentence and him taking up the offer from Henrik Vangar.

I have already ordered the second book in the trilogy and cannot wait!