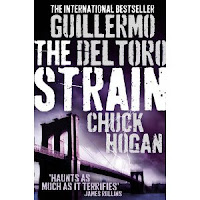 I picked this up in the library and thought 'Oh, good , this looks similar to The Passage'.
I was wrong. Premise very similar. Plane arrives at US airport everyone dead inside, vampire virus gets loose. Whilst I absolutely support the move towards claiming vampires back to horror from romance, this was horror without substance. I notice that one of the authors is a film director and that may explain it, this read as though it was a film script. There was no descriptive text, no characterisation beyond the barest minimum - what did the characters look like, the buildings, New York? It also was very American, full of acronyms, CDC, FAA, SUV, et al, very irritating.
I notice it is part of a trilogy but I have to say vampire lover that I am I will not be reading on. I might watch the film though.........
Posted by Vicki Goldie, author at 07:55