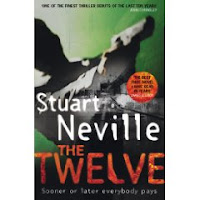 I really rated this book which is due to be published this July. It is not the sort of book I would normally pick up. I had thought it was more a supernatural sort of book, (rather than a thriller). It was however, simply unputdownable ! I read it over twelve hours, finally finishing it at 2 in the morning. There are very few books that I have read that have this effect on me! What I found fascinating is that although the lead character, Gerry, is not at all conventionally likeable, -how can one love an IRA killer-, we still became invested in him and wanted to find out how this book would resolve itself, and at the end, despite what he had done, uncomfortably, you felt justice had been done. This will make it a very good reading group book, (some reading notes would be useful), the themes of revenge, justice, Ireland, redemption are just a few of the things we could talk about!
Posted by Vicki Goldie, author at 10:52