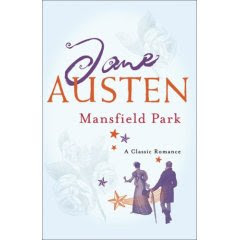 This was the choosen book for Westbourne Library's Book Group 3 last month. I really had forgotten how good the real classics were. I must say this is not my favourite of Austen's novels. I found Fanny Price very insipid and too worthy to be appealing. The same could be said of Edmund who really is a bit of a prig, so I suppose you could say that they are well suited.
I found the end somewhat rushed, all the loose ends were tied up rather quickly, everyone got their just desserts and it was all very neat but not very satisfying.
The great skill and joy in the novel was in Austen's social commentary. The joy of a reading group is that everyone had a favourite section that reflected this and we were able to tease out just what Austen was trying to say and show her subtle way of reflecting the injustices of society of that day through her characters. I scarcely need say that this is an excellent novel for a reading group to tackle, particularly when it is a mixed group of ages and the sexes!
We also had an interesting discussion on the small screen versions of this novel and all deplored the recent outing on ITV, if anyone was miscast it was Billie Piper, who I admire as an actress, and who on earth let it be filmed with those eyebrows! They were so out of place that it was totally distracting!