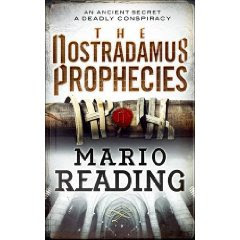 This book comes out next month in August. Do look out for it. It really is an exciting thriller. An up market version of the Dan Brown genre.

1566, Nostradamus has hidden some of his prophecies that will only be revealed at the right time. It fortells the second coming and the identity of the third anti-Christ. The knowledge of where to start the quest has been held by French gypsies for safe keeping ever since.

There is a secret French sect who are also after the prophecies and their henchman, Achor Bale, will stop at nothing to get them.

Into this mix comes our hero, a flagging writer called Adam Sabir, who is an expert on Nostradamus, he takes off with the gypsies in a race through France to get there first.

Suspend belief, go with the flow and enjoy. This would be an excellent book to take on holiday with you, provided you will have plenty of time to read , as I assure you you will not want to put it down. I found delving into the gypsy way of life fascinating. The psychological insights into Achor's behaviour spot on, making a really well rounded character, rather than a plasterboard baddy. We also have a memorable world weary, and wise French cop , Captain Calque, priceless.