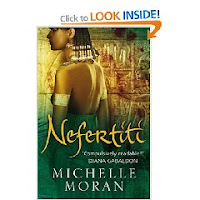 This is an enjoyable if not challenging historical novel. It would make an excellent holiday read or a pure escapist read. I do not think it is very historically acccurate but if you suspend this then it is an enjoyable Egyptian romp.
Posted by Vicki Goldie, author at 15:54

Moran's Nefertiti is seen in better prspective if you understand what you're buying in the first place. The novel belongs to that genre we call historical romance rather than historical fiction. It's the sort of novel where little is expected of the author in the way of research or character development. And it's fine for people who like that sort of thing. This confusion between literature and fluff would have been impossible in the age before computers when blogs were called essays and were written by serious people, and lies were not as common as weeds in a garden gone to ruin.

I'm going to suggest tht you look at my blog "Egyptian Facts and Fiction". Click on http://wklein722.blogspot.com