October has been a busy month!

Phew, we have had a busy month here in Bournemouth. Firstly our reading groups have reached 52! We have been running a survey with them and they have feed back that they would over whelmingly like Readers Days, on Crime, General Fiction and Historical Fiction. So please keep your eyes open for advertising for future author events.

In October we had the excellent Bournemouth Arts by the Sea Festival. As part of this there was the interestingly named Horrorlitic events. Bournemouth has a wealth of literary connections,the author of Frankenstein, Mary Shelley is buried here, as is the heart of her husband! Robert Louis Stevenson wrote The Strange Case of Dr Jekyll and Mr Hyde while living here, and the author of Dracula, Bram Stoker used to come here on holiday! 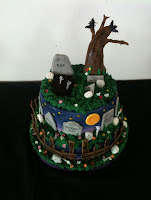 So we had the eminent horror writers Ramsay Campbell and Stephen Laws to the Bournemouth Library for tea with a specially commissioned horror cake. Over 40 people came to be chilled by readings of some of their latest short stories. Later they were grilled by the audience on how they wrote, where they got their inspriration from and whether they were normal! ( Their wives said yes!) Waterstones were there to sell books for a signing and I bought a particularly chilling collection of short stories. Review to follow!