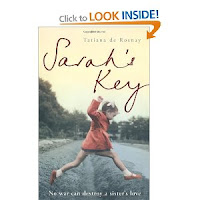 This I believe is Tatiana's first book in English. I looked it up having enjoyed The Secret ( review below) so much.

I also enjoyed this one and again it will make an excellent Reading Group read. This is another dual time novel set in the present day and war time Paris. This is Paris of WW2 the time of the Vichy government. This story concerns a shameful and little advertised fact of that time. The French Police (not the Nazis) rounded up over 13,000 Jews most of them women and children, in the summer of 1942. They were kept in inhumane conditions before finally they were then deported in cattle trucks and killed in Auschwitz. Most of over 4000 children were French. They did not survive.

This is the story of one little girl and a modern day journalist's obsession with finding out her story.

It is a good book, that keeps you guessing until the end. I read it quickly over 2 days as I was desperate to find out what happened.

As is often the way the older story had more resonance. I thought the journalist was a little naive in every sense but then we are all flawed aren't we, so it was true to life!

This book has just the right mix of past and present. There is a heart wrenching tale of WWII tragedy and the present day story of the person trying to figure out the clues to the past. This book pulls you in and keeps you in. Easy read.